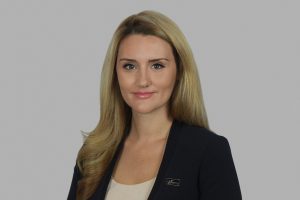 Nevila Kaso is the Chief Operations Officer and Intelligence Director of the Detroit Crime Commission responsible for the daily operations of the organization including overseeing the Intelligence Department. Ms. Kaso graduated from Oakland University with a Political Science & Communications degree and went on to pursue a Master’s of Arts in Criminal Justice and a Master’s of Science in Intelligence Analysis. She subsequently worked with the Oakland County judicial system prior to joining the DCC at its inception in 2011. Ms. Kaso is a member of the Arson Reward Board, member of the  Advocates and Leaders for Police and Community Trust group, Crime Prevention Association of Michigan, Co-chair of the Detroit Historical Society group, a volunteer with the Big Brothers Big Sisters of Metropolitan organization and an associate board member of the American Cancer Society.